Homily on St. Thomas Aquinas and the Importance of a Catholic Education 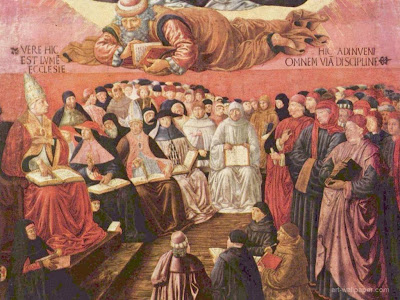 Another great reason for school vouchers. Call your reps.!

It is my understanding that St. Thomas Aquinas , Albertus Magnus and the Dominican Order in general played an early role in moving the concept of free-markets forward. Is this true ? Have you any reference sites for this.

You should include sources for some of your scholarship. There are certain items herein that are demonstrably wrong. They are more or less minor and are pften repeated, but you need to see some of the up-to-date biographies.

I have no doubt but that you will--it is good to see someone educated writing along these lines. A rare thing these days to be sure.

I think you could honestly say that Aquinas played a role in advancing the concept of free markets.

I found the following on the website of the Acton Institute:

I would look to the Acton Institute for more information on this subject.

"It is lawful for man to possess property.� Human affairs are conducted in more orderly fashion if each man is charged with taking care of some particular thing himself, whereas there would be confusion if everyone had to look after any one thing indeterminately."

Thomas Aquinas displayed remarkable acumen in his early education and, to the dismay of his parents, resolved to embrace the religious life. He received the Order of Saint Dominic sometime between 1240 and 1243, and continued studying under Europe’s greatest scholars, including Albertus Magnus. Aquinas spent his life teaching, traveling, preaching, and writing, until a powerful religious experience at Naples in 1273 caused him to put down his pen forever. His masterpiece, the Summa Theologica, a culmination of his attempt to synthesize Aristotelian philosophy with Christian theology, was left unfinished. He died on March 7, 1274.

Aquinas’s economic thought is inseparable from his understanding of natural law. In his view, natural law is an ethic derived from observing the fundamental norms of human nature. These norms can be understood as the will of God for creation. An unlawful act is that which perverts God’s design for a particular part of His creation. Economic transactions, according to Aquinas, should be considered within this framework, since they occur as human attempts to obtain materials provided by nature to achieve certain ends.

Private property is a desirable economic institution because it complements man’s internal desire for order. “Hence the ownership of possessions is not contrary to the natural law,” Aquinas writes in the Summa Theologica, “but an addition thereto devised by human reason.” The state, however, has the authority to maintain a legal framework for commercial life, such as enforcing rules prohibiting theft, force, and fraud. In this way, civil law is a reflection of the natural law. Further, Aquinas believed that private ownership of property is the best guarantee of a peaceful and orderly society, for it provides maximum incentive for the responsible stewardship of property.

Aquinas helped relax the traditionally negative view of mercantile trade that figured prominently in, for example, Patristic thought. For Aquinas, trade itself is not evil; rather, its moral worth depends on the motive and conduct of the trader. In addition, the risk associated with bringing goods from where they are abundant to where they are scarce justifies mercantile profit. The merchant, however, must direct his profits toward virtuous ends.

Greetings of peace from Pakistan!

Thank you very much for your very informative article and for sharing so many things about a great Dominican St. Thomas Aquinas. You have done a marvelous work on St. Thomas!

I will be sharing some of your points during my homily this evening with the Dominican students and priests. I will mention your name.

The areas of education you have raised for Catholic Education are very valid. I would say that such fields of education are also extremely important for the seminarians and Dominicans students in formation as well.