Religious Freedom and the Contraceptive Mandate 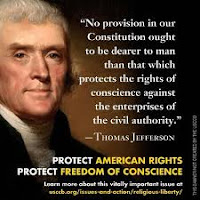 Speech on Religious Liberty and the Contraceptive Mandate by Father Peter West, Vice President For Missions, Human Life International, in front of the Warren County Court House in Front Royal, Virginia on March 23, 2012.

The most precious freedom we enjoy in the United States is the freedom to practice our religion, according to the dictates of our conscience. It can be called our first freedom. This freedom, which continues to be denied in many parts of the world today, is what drew the first settlers from Europe to America.

The First Amendment of the United States Constitution guarantees this right. It states: “Congress shall make no law respecting an establishment of religion, or prohibiting the free exercise thereof; or abridging the freedom of speech, or of the press; or the right of the people peaceably to assemble, and to petition the Government for a redress of grievances.”

The right to free exercise of religion is more than the much narrower freedom to worship. It includes the right to practice one’s religion within undue interference from the state and to make arguments about public policy based on our religious convictions.

When I visited Turkey in 2010, I could offer Mass in Church, but I was illegal for me wear clerical clothing. Christians have been arrested in Turkey for handing out religious literature. Guest workers from the Philippines are free to attend Mass behind closed doors in Saudi Arabia, but not to openly speak or display their faith publicly.

Of course, things are much better here, but there are clouds on the horizon. Last year a couple from California was fined $300 dollars by the City of San Juan Capistranofor holding Christian Bible study sessions in their home. They were threatened with another $500 fine for each additional gathering.

Many secularists in the United States are willing to grant religious people the privilege of worshipping privately in our churches, but are trying to use the courts to drive religion out of the public square.

In January, the usually sharply ideologically divided Supreme Court repudiated the Obama Administration’s Justice Department when the Court sided with the Hosanna-Tabor Evangelical LutheranChurch and School against the Equal Employment Opportunity Commission in a unanimous 9-0 decision. The Court decided that Churches had the right to decide which ministers they could hire and fire. Many considered this a tremendous victory for religious liberty. However, what should be alarming is that the Obama Administration thought this case had merit and brought it all the way to the Supreme Court.

In 1808, Thomas Jefferson wrote a letter to Samuel Miller in which he said "I consider the government of the United Statesas interdicted by the Constitution from intermeddling in religious institutions, their doctrines, discipline, or exercises."

Can anyone imagine that Thomas Jefferson would approve of the Obama Administration trying to force Catholic institutions or any faithful Catholic or any person of good will who holds that contraception, sterilization and abortifacient drugs are immoral to pay for them through the health care plans they offer to their employees?

Before leaving Baltimore on October 8, 1995, Pope John Paul II warned us “Democracy stands or falls with the truths and values which it embodies and promotes.” He warned that if we that a democracy must safeguard objective values. Otherwise, democracy can become the tyranny of the majority or of the loudest voices. The Pope said” If an attitude of skepticism were to succeed in calling into question even the fundamental principles of the moral law, the democratic system itself would be shaken in its foundations.”But he said “The United States possesses a safeguard, a great bulwark, against this happening. I speak of your founding documents: the Declaration of Independence, the Constitution, the Bill of Rights.”

Our Founding Documents recognize that our rights come from God. They are not concessions granted by the government. They recognize the natural law written on each human heart.

In a letter to New London Methodist, in 1809, Thomas Jefferson wrote "No provision in our Constitution ought to be dearer to man than that which protects the rights of conscience against the enterprises of the civil authority."

I think Thomas Jefferson would be appalled that today in America Christians are fined for having a Bible study in their home; that the Justice Department thinks it has a right to say who the Hosanna-Tabor EvangelicalLutheran Church should hire as a minister. Thomas Jefferson would be appalled that today the Obama Administration is attacking the freedom of conscience of Catholics. In the Virginia Act for Establishing Religious Freedom Jefferson wrote: "To compel a man to furnish contributions of money for the propagation of opinions which he disbelieves and abhors, is sinful and tyrannical."

The Health and Human Services Mandate, which compels Catholics to pay for the coverage of services which we hold to be morally abhorrent, is an affront to the religious liberty of Catholics. But it should offend every American who believes in the principle of religious freedom and freedom of conscience guaranteed by the Constitution. It goes against the promises made by President Obama when he spoke at the Commencement Ceremony at the University of Notre Dame before his health care bill was passed. This injustice cannot stand.
Posted by Fr. Peter West at 11:15 AM